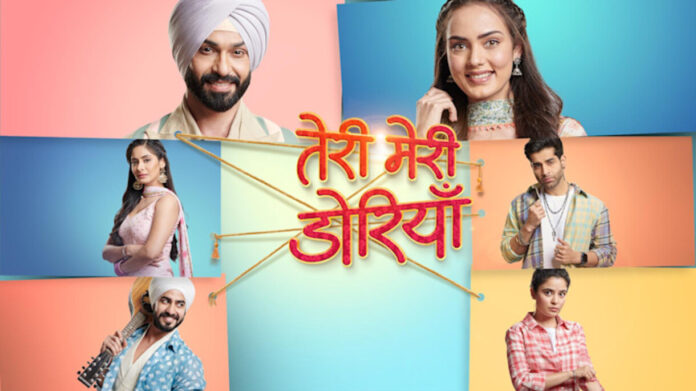 Sahiba notices lohri’s firewood falling towards Angad and saves him. Angad’s hand falls on a kumkum thali and kumkum falls on Sahiba’s hair. Guests discuss that their jodi looks so good as if its god made. Santosh’s neighbors Kul and Nimmi think of wishing happy lohri to Santosh and pull her legs. Santosh overhears them and thinks of teaching them a lesson. Kulwinder/Kul and Nimmi visit her and ask why didn’t she come to buy milk in the morning. Santosh says she was busy. They ask if Seerat won a necklace for dancing at Brar’s. Santosh boasts that Seereat won a diamond necklace worth 2-2.5 lakh rs at Giddha competition and taunts that they look jealous. They taunt her back that whatever she tries, Brar’s will not get their son married to Seerat; she is lucky that Sahiba runs her house or else she would have been more broke. Santosh sits speechless and jealous.

Angad shouts at Sahiba for touching her. Sahiba says she saved him and he is yelling at her instead. Angad questions her credibility. Sahiba gives him a befitting reply to his each allegation. Angad says she purposefully tampered firewood to hurt him as she made all the arrangments. Sahiba says he is not that important. Their argument continues. Garry asks Seerat when is her driver coming to pick her up. Seerat acts as calling her driver and fires him for being late. Garry says he will drop her home and asks her address. She gets tensed and sits in his car thinking where to stop him. He offers her cold drinks. She nervously denies. He plays Daljit Singh Dosanjh’s song. She asks if he is also Daljit’s fan. He says he loves Punjabi songs and has roamed around the world. She feels more impressed.

Santosh boasts how Angad roams around Seerat and shows Angad and Seerat’s bedroom pic to Nimmi and Kul. They taunt that now they understood how Santosh got party passes. Santosh gets angry on them for pointing at Seerat’s character. Angad and Sahiba’s argument continues. Jaspal asks Seerat to apologize Angad and end the issue. Sahiba says she will if he can point out at her mistake, she is not arrogant and superegostic like Angad to not accept her mistake. Show organizer thanks Sahiba for saving Angad and tells Angad that Sahiba is a good artist and good at heart. Angad says Sahiba is no one to argue with him and boasts about his wealth. Sahiba reminds how he was begging her for help at her shop and walks away saying she doesn’t have much time to argue with him. She notices sindhoor on her hairline and tries to wipe it. A lady asks her not to remove it as its god made her jodi with Angad.

Precap: Seerat thanks Garry for dropping her home and thinks he is more smarter and richer than Angad. Sahiba returns home. Santosh asks how did sindhoor falls on her. Keerat explains. Seerat says the are talking about her alliance, but Sahiba got sindhoor on her hair.