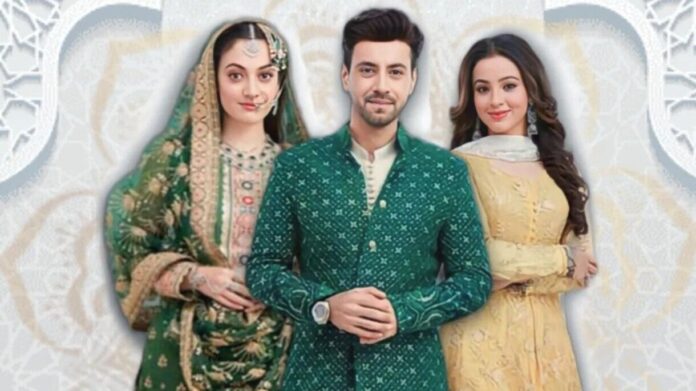 Scene 1
Dadi tells Dua that I feel Gazal has eyes on Haider. Dua says there is nothing like that, she just craves family love. Dadi calls Gazal and asks if she saw her cutter? I can’t find it. Dua says don’t worry, I will buy another one for you. Dadi says not everything can be bought from money, I brought it from my parents’ house, it was my father’s last memory and Gazal would know about its value the most right? Gazal nods and says I have lost my father’s house and I understand the importance of it. Dadi says then we should get your father’s renovated so you can go back to your father’s house. She asks Dua to get her house renovation started. Gazal is shocked, she nods. Dadi tells Dua that I know what I am doing and its for the best.

Ruhaan tells Gazal that Hina shouldn’t call you as her daughter as I am her son. Gazal says its useless to talk to you. Ruhaan says I have become useless since I have seen, I will have a heart fail if we don’t get married. Gazal asks him to shut up and leaves. Ruhaan says I will talk to Hina about our marriage.

Gazal tells Gulnaz that I have an idea and after tonight they won’t have an idea to throw me out of this house. She tells her idea but Gulnaz says this is a dangerous plan. Gazal says we can’t be scared if we want to achieve what we want.

At the night time, Gulnaz screams and calls everyone. There is water filling in the lounge. Rahat says where is this water coming from? Gazal is lying in the bathtub and thinks now I will start my drama. She hits on her head and faints in the filled bathtub. Ruhaan comes to the family and says Gazal is not in her room. Haider says I will go and check the bathroom if its leaking. Rahat says the bathtub might have spilled. Gulnaz says what if Gazal is inside? Hina gets worried for her. Gulnaz says what if Gazal slipped in the bathtub and might have drowned? Hina says don’t say all that. Dadi says this is all Gulnaz’s drama, nothing will happen to her and even if it does then its better she is gone. Gulnaz says don’t be heartless. Haider is trying to open the bathroom door. He calls out to Gazal but she doesn’t respond. Hina is worried and prays for Gazal. Dua says she will be okay. Ruhaan and Haider break the bathroom door, they find Gazal lying in the bathtub and she is unconscious. Haider screams Gazal and brings her out. All look on. Dua sees Gazal in Haider’s arms. Haider puts her down on the sofa. Dua says she is breathing but her lungs her filled with water. Ruhaan goes to call a doctor. Hina and Dua ask Gazal to wake up. Dua says don’t worry. Gulnaz says someone has to give her CPR to save her life. Do something before its too late. She thinks Gazal might be acting to be unconscious. Hina says do anything but save her. Haider looks on and grabs Gazal’s face, he is about to give her mouth to mouth CPR but Gazal coughs and wakes up. Gulnaz hugs her and whispers you should have acted for a bit longer. Gazal whispers that I fainted for real. Hina hugs her and says thank God you are okay, she asks what happened? how did you slip in? Dadi thinks how did Gulnaz find out about the water? I think they are doing this drama together. Hina asks Dua to take Gazal from there. Gazal smiles at Haider and thinks he saved my life twice and proved that my love for him is not wrong. She thanks Haider and Dua takes her from there. Gulnaz smirks.

The doctor checks Gazal and Hina asks her to rest. She gives her soup. The doctor asks what happened in the bathroom? Gazal says I don’t remember what happened with me, maybe I reached there in my sleep but I don’t have a habit of sleep-walking sometimes. The doctor says she might have done it because of stress or trauma. Dua says yes she has gone through a lot of stress. Gazal cries and says why is God punishing me? The doctor says she might have PTSD so the only solution is to take care of her and don’t leave her alone. Hina says I won’t even let her out of my sight now. Gazal hugs her and thinks I wanted that only.