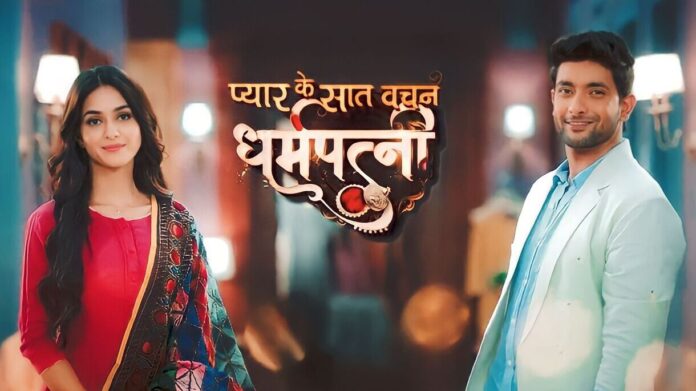 The Episode starts with Hansa coming to the hospital crying and running with Kinjal and Parul. Receptionist tells that he is operated just now. Hansa looks at him from outside and asks Prateik to get up. Doctor comes out and tells Hansa that they need to arrange blood for her husband. Malhar comes there. Hansa cries and curses the person doing his accident. She doubts Ravi’s family has done the accident. She asks Malhar if he will be fine. Malhar says he will be fine, and gets worried. He thinks he has to kill him.

Inspector sits to have food. Gulshan calls Inspector and says I asked you to ask Vimla to teach a lesson to Pratiksha. He says Pratiksha has become teacher there and is impressing everyone there. He threatens the Inspector and tells that he will get him transferred to a bad place. Inspector calls lady constable and asks her why she took out Pratiksha from the cell, for the radio night. He says Gulshan called and pressurized him to get her tortured by Vimla. He asks her to ask Vimla to torture Pratiksha. Pratiksha is restless in the lock up and thinks she felt this when Maa and Papa had died. Doctor comes out and tells Hansa that Prateik is out of danger now. Hansa thanks the goddess. Malhar thinks he will go and fulfill his mannat which he has done for Maasa ji. Hansa says she got nephew like a diamond. Doctor says he will take time to fully recover.

Thakur calls Malhar and asks him to do something. Malhar says I will do once he is shifted to ward. Thakur asks him to bring besan laddoo for the celebration. Malhar thinks what to do, how to kill him. Kinjal hears and asks whom you want to kill. Malhar says mosquito. Kinjal says she was going to bring laddoo for prasad. Malhar asks her to go and says he will be here.

Vimla puts water pipe in the lock up where Pratiksha is sleeping, and tells Inspector that the work is done. Pratiksha wakes up, fully drenched in water and shouts for help. Inspector laughs hearing her and have peanuts. Mandeep gets Keerti’s mother’s call. Keerti’s mother Manvi tells that Gulshan is getting that girl tortured in jail. Mandeep says Gulshan is doing right, you lost your daughter and my son seems to be lost. She says she wants to meet her. Manvi says ok.

Mandeep calls Ravi and asks where is he? Ravi says he heard a girl talking on radio, like Keerti used to talk. He says he will check in every jail. Mandeep gets worried for him and asks him to come home. Ravi says ok. He thinks I used to get irritated when Keerti used to say this, but now I am happy, and feels strange. Malhar asks Hansa to go home with Parul and take rest. Hansa refuses to go, until he becomes fine and opens his eyes. Malhar asks her to go and pray to Goddess. Hansa refuses. Parul says I will call you. Hansa refuses. Malhar insists. Parul goes to drop Hansa. Malhar feels bad and thinks he is going to murder Maasa ji. Lady constable comes there and takes out Pratiksha from the lock up. Inspector scolds her for murdering Keerti. Pratiksha asks Inspector to file case against Vimla as she has tortured her in jail. Inspector asks do you have any proofs. Pratiksha says I will talk to my Chachu, who will talk to Commissioner. She says I will not bear anything wrong, and asks him to move Vimla from her cell. Inspector asks lady constable to move Vimla from there.

Thakur calls and asks Malhar if he has done the work. he says if he opens his eyes and watch CCTV footage. He threatens Malhar and says your Pratiksha will be some man etc, and you will lose job and her. Malhar asks Thakur to threaten Maasa on phone. Thakur says he won’t be scared and asks him to kill him. Malhar says he has become Police wala goon. He waits for a chance. He then hears two ward boys talking about gambling. He asks them to come with him outside, and tells them something. He says my work shall be done and sends them to do his work. He thinks they will take out stretcher’s wheels and Maasa ji will be dead. Prateik gains consciousness. The ward boy brings the stretcher there to take Prateik to the ward. Prateik asks if there is someone from my family. The ward boy says Malhar ji. Prateik asks him to call him. Malhar comes there and says you called me here. Prateik says what do you think that your truth will not be out infront of me, and says I can prove my daughter’s innocence like I helped you get this job. Malhar is shocked and asks what you are saying. He says I want Pratiksha ji to come out of jail soon. Prateik asks when you will take her out, after she gets hanged. He says my daughter is innocent and you are guilty so why she will be punished. Malhar asks what are you saying? Prateik says I have seen the footage, and will get you punished, and you had killed Keerti and not my Pratiksha. Malhar is shocked.

Precap: Ravi says I will snatch all happiness from her. Pratiksha says she will take stand for herself. Prateik comes to the PS with the lawyer and says Pratiksha is innocent.