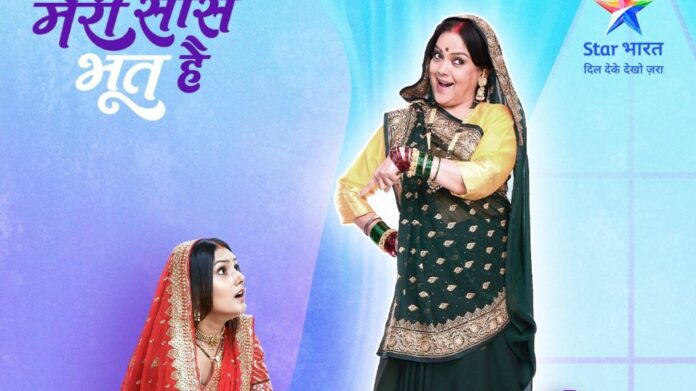 Gaura’s father sees her sitting on floor in shock and asks what is sitting like that. Gaura says she saw champakiya chudail. Father says its just a story to frighten children. Gaura says chudail has grown old now and was wearing blue sari. Father thinks she got afraid seeing something. Kanchan walks into Som’s house with a girl Komal and her parents with Som’s alliance and tells Ganga that she always reaches on time. Their jokergiri starts. Komal touches Ganga’s feet and then walks to Rekha. Ganga jokes not to touch Rekha’s broken foot or else she will get broken blessings. Servant serves tea and snacks. Rekha asks Komal’s qualification. Komal says till 9 a.m. Father says they sent Komal to school at 7 a.m. and she returned home by 9 a.m., they realized that she can’t study and hence Komal is illiterate. Rekha thinks she will not accept an illiterate DIL. She using her servant’s help tries to frighten Komal saying Som is alcoholic and womanizer. Komal says its okay for her as she also sometimes consumes alcohol and already had 11 boyfriends.

Gaura’s friend Chanchal with her mother visits Gaura. Mother informs Lakshmi that Chanchal’s father fixed Chanchal’s alliance. Lakshmi says Gaura’s father just lazes around and will never find alliance for Gaura. Gaura says her father cares for her a lot, in fact he introduced her to a boy today. Lakshmi says she is sure boy must have rejected her. Gaura says she rejected the boy as he works as a clerk at crematorium. Lakshmi says what is wrong in it, he would have given all his salary to her; she fears Gaura will never get an alliance again.

Komal enters som’s room. Servant via a set up throws water on her and punches her face with a boxing glove. Komal falls down. Rekha congratulates Komal’s parents for the alliance. Komal walks out and says she will not marry a boy who is alcoholic and womanizer and walks away. Her father scolds Kanchan for humiliating him and his daughter. Rekha meets pandit and frightens him to expose his secret that his wife eloped with a truck driver. Pandit says he fears that truck driver will return his wife back as his wife always fights with him. Rekha gives him money and asks him to find a good alliance for Som.

Rekha returns home. Kanchan cries that her husband will not get promotion now as Komal’s father is husband’s boss. Rekha offers her cold buttermilk. Drama continues. Som enters. Kanchan complains him against Rekha. Chanchal tells Gaura that she should have accepted crematorium manager’s alliance as he was alone and if she marries a boy who has a mother, her MIL may torture her. Gaura gets afraid.

Precap: Som tells Rekha that he will marry only if he likes a girl. Rekha says she will get a girl of his choice. Pandit gets a n ex-MLA’s daughter’s alliance for Som. Gaura clashes with Rekha again and calls her champakiya chudail. Kanchan laughs and thinks this girl rightly identified Rekha.