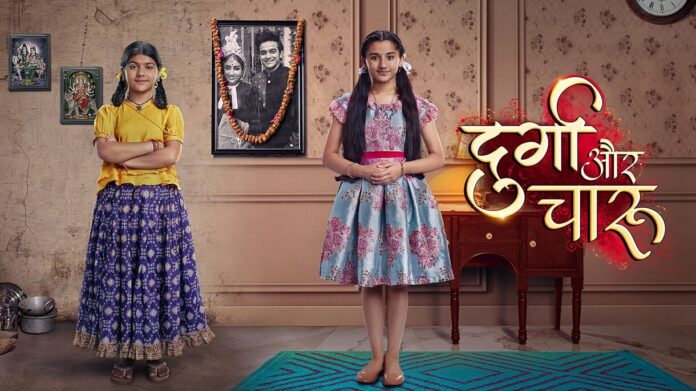 Scene 1
Bholi says Makay. I. She laughs. Charu says tell me what did you do to him. Stop laughing. Bholi says you are gonna lose even today. Some men come and stop Charu. Charu says leave me. Who are you? Durga is worried. These are Bholi’s men. Bholi says thought I would come without preparation? Bholi says I will tell you your dad’s truth. Durga runs to find Charu. She says, Charu. No one is there. Binoy says careful Durga. Durga wonders where Charu is. She sees a bottle. Durga is worried for her. Sampurna says let’s go, please. Who are you looking for?

Charu says Bholi tell me where is my dad. Bholi ties her. Bholi says that the day they came to the orphanage I asked him to take money from haveli. He slapped me. I hit his head on the floor but he didn’t die and run from there. Charu cries. Charu cries and says that means my dad is alive. She cries. Charu says I will find my dad. Bholi says if he isn’t dead I will kill him and you too. You both can talk in heaven. They throw petrol around her. Bholi sets fire around her. Charu screams for help. Durga prays for charu. Binoy says why is she so worried. Charu screams for help. She says Durga save me.

A man comes there and sees Charu in the fire. He throws water and saves her. He says thank God she’s alive. Charu has fainted. It’s Makay. It starts raining.

Scene 2
Bholi comes home. She asks where is Bholi? Bholi says I was home. What happened? Who did I harm? Durga says, Charu. What did you do to her? Binoy says, Charu? Makay says the girl is better. I will ask who did this to her and why. He doesn’t recognize her. He goes out to get water. Charu wakes up. She looks around. Charu says where am I and who saved me? She says I’ve to go home. I have to go home before Durga says something. Charu comes out. She says I should thank the person who saved me. But I guess I’ve to go.

Durga asks where is Charu? You met Charu in the jungle today. Samourna says what? Durga says yes she met Charu in the jungle. I took you there to show you what she did to Makay. She is innocent. Bholi did all the sins. Charu says I’ve to get to haveli. Where am I? She does’ see Makay. He is fetching water behind her. He spills the water. Charu looks back.