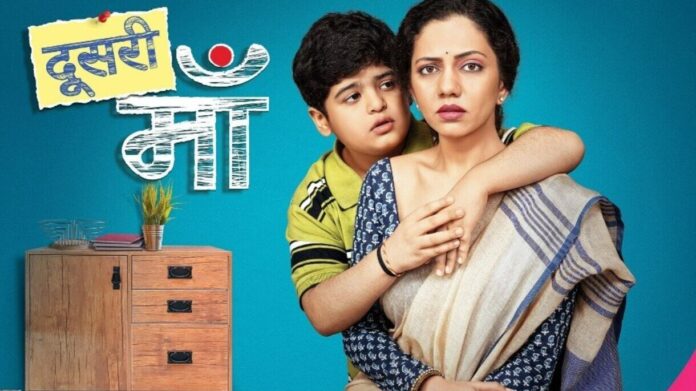 The Episode starts with Nupur asking Aastha if she said sorry just like that. Aastha says yes, and tells that she don’t like that boy. Krishna asks Yashoda to go from there and tells that badi baby saw you here, then she will get angry. Yashoda asks if anyone asked you to say this. Krishna says no. He tells her that Servants used to call children as baby near his house. He asks her to regard him as her Servant. Yashoda says I know that they don’t behave well with you, give them sometime. Krishna says you didn’t do right by making them apologize to me, I am staying in their house. yashoda says I didn’t give them bad upbringing that they are lying, and tells that time will make everything fine.

Yashoda tells Ashok why God sent Krishna in my life. He says if he wants me to make his life better, or wants to bring storm in my life due to him. She tells that she never cried, laughed, felt happy, what she felt due to Krishna. Ashok thinks he is scared to hide this truth from her.

Lalita’s goon sneaks in Krishna’s room through the window later in the night. Krishna sees him and asks who are you? Yashoda hears Krishna and comes out of her room. She asks who is there? She sees the thief and calls Arvind. She runs to room and calls Ashok says somebody entered the house. Krishna holds the thief. Arvind comes downstairs and sees goon pushing Krishna. Krishna is about to run behind the goon and also Arvind, but Babu ji stops Krishna. He blames Krishna for the theft and tells that the goon might be his aide. He asks Malti to check her stuff. Arvind tells the truth. Ashok asks Babu ji not to relate thief to Krishna. Amma asks how did he enter the house? Babu ji says he might have opened the door or window. Ashok and Arvind feel bad. Aastha asks what happened? Babu ji says Krishna had called his partner for stealing. Ashok asks Yashoda to make Krishna sleep. Yashoda asks Krishna why did you go behind the thief, if something had happened to you. Krishna says if I had caught the thief then Malik would have believed me. Yashoda says you are not a thief. Krishna smiles.

Mahua gets angry on Arvind for taking Krishna’s side and expresses her hatred for Yashoda. She tells that this family’s darkest truth will come out. Ashok asks Yashoda if she had opened the window. Yashoda says no. He says he will go to PS and will lodge the case. The goon calls Lalita. Lalita scolds him for not doing her work. Ashok asks Yashoda, why you didn’t tell that Lalita had come there. He tells that for Lalita, Krishna is her enemy as he got her business closed. Krishna comes there and asks for his mother’s pic for today. Ashok imagines hugging him. Krishna talks to his mother’s pic in the storeroom and tells that he is scared, and can’t switch on lights, as electricity is costly. He tells that he don’t stay here as Servant, but as the Prince. He says he got a big room. Ashok hears him and wishes to tell him that he is his Prince and thinks how to ensure it.